How can we help you today?

Several modes of operation can be used, including:

Youcan import an Acomba order with the Import Order(s) button in the Tasks menu - List mode or Distribution mode.

gives the popup below

The task(s) is (are) then created in Progression. You can see the information in the task’s Acomba tab.

The second button is used to update the order in Acomba before the end of the process, if desired. 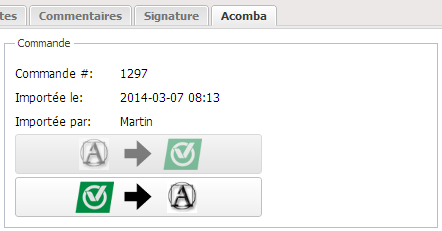 In your task progression process, one of the steps (e.g."To invoice in Acomba") allows the task to be transferred to Acomba. When the task is successfully transferred, its status changes to (for example) "Invoiced in Acomba."

You can see the information in the task’s Acomba tab.

Did you find it helpful? Yes No

Send feedback
Sorry we couldn't be helpful. Help us improve this article with your feedback.